The Pilgrimage of St Piran’s Stone

By tradition, St Piran came over from Ireland on a millstone in about 460AD. St Piran’s legend also states that he used a large black slab of Cornish rock to build himself a fireplace. As the fire grew hot a trickle of pure white metal began to ooze from the stone. By sharing this knowledge with local people he provided the Cornish with a lucrative living from tin mining. In return he was made Cornwall’s patron saint. The trickling white metal upon the black background remains his enduring memorial, the Cornish flag.

During last year’s group pilgrimage through west Cornwall, I was on my way back along the causeway from St Michael’s Mount when a small stone lying close to the causeway caught my eye. It represented the cross of St Piran. Often on these pilgrimages objects with some totemic significance appear and this seemed just such a gift, particularly powerful after what had been a profound and uplifting ceremony shared by the group in on our visit to the Mount.

I carried the stone gladly in my pocket as we continued on our pilgrimage over the next couple of days, enjoying the feel of its smooth surface in my fingers. When we reached the holy well at Perranarworthal it seemed appropriate to let it go and I placed the stone carefully on a ledge at the back of the well. It seemed fitting that it could rest there, bathed in the beautiful water of St Piran’s Well.

As a participant on our Cornish pilgrimage last year Caro had guided us through the beautiful ceremony that the group had shared on the Mount just prior to the finding of the stone. As such it seemed a particularly suitable offering.

Thus after almost a year she revisited Perranarworthal and sent me the following message:
“Very pleased to say I found it!
I visited the holy well today and there it was, sitting on its ledge where you carefully placed it.
I did hesitate before I felt I had “permission” to take it
It looks as good as it always did.”

So St Piran’s stone is on its way to Lindisfarne. The next stage on its remarkable pilgrimage. 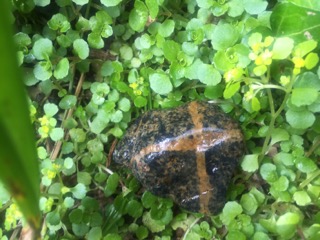