The proposed route will extend from the cliff tops of West Cornwall at Carn Lês Boel near Land’s End to Hopton on the Norfolk Coast. The pilgrimage is being developed as an integrated whole, that can also be walked in sections. It is intended to appeal to people of any faith or none.

The pilot project of 140 miles between Brentor (west Dartmoor) and Glastonbury was completed in 2011 with waymarking and a guidebook for the route. In 2012 this was followed by a guidebook for the Cornish section which links up with the existing route at Brentor. The pilot section guidebook has now been updated and enhanced. It is available in one volume with the new guide for the route between Glastonbury and Avebury. You can purchase copies of the guidebooks here.

The galleries of photographs give an indication of just some of the features and places of interest along the way.

The Earth Energy currents identified by Hamish Miller and Paul Broadhurst and described in their book The Sun and The Serpent are being followed in developing this project. They give a coherence to the route connecting many sites associated with pre- Christian earth based spirituality such as Avebury Stone Circle, as well as centres of Christian pilgrimage including  St Michael’s  Mount and Glastonbury, which was known as the second Rome because of its prominence as a destination for pilgrims in the Middle Ages. 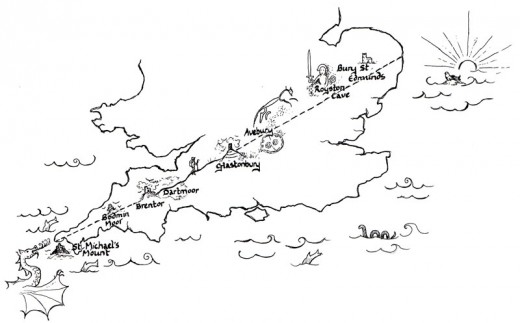 The desire to journey is deep in the human psyche, maybe stemming right back to the earliest human experience of hunter gatherers. This route with its associations with myth and history, spirituality and wilderness offers a rich opportunity to reconnect with ourselves and with the earth. This process begins to happen naturally as we slow to the pace and rhythm of walking for which our senses were evolved and our minds so often overstimulated by the demands and distractions of modern life begin to settle.

An intention underpinned with reverence and respect creates the possibility that we not only receive the gifts that pilgrimage may offer, but nurture the relationship of interdependence and reciprocity with all life.

In travelling between these sacred places one not only refreshes one’s own spirit but assists in the work of reviving the latent spirit of the earth.