GLASTONBURY TO AVEBURY – Reflections and Connections

It is said that we don’t seek to walk in our ancestors footsteps’, we seek what our ancestors sought. This spiritual questing has drawn people to Glastonbury and Avebury for millennia. Quite what role the influence of the Michael and Mary Lines play in underpinning the potency of these places and their capacity to touch and inspire people is a matter for speculation.

The extension of Mary/Michael Pilgrims Way now offers a route for pilgrims to follow between the two. In creating our pilgrimage for the 21st century we are continuing to base our route on the earth energy currents dowsed by Hamish Miller and Paul Broadhurst and described in their book “The Sun and the Serpent.” Tracking these energies through the landscape creates a coherence and particular quality to the experience of the pilgrimage.

From Neolithic times and maybe earlier, Glastonbury and Avebury were recognised as significant locations within a culture where the Earth Mother was venerated, the earth’s energy often symbolised in the form of dragon or serpent.

There are some striking connections and notable features shared by Glastonbury and Avebury. For example, it is now common belief that Silbury Hill, part of the Avebury complex of Neolithic sites and even Avebury Henge itself were constructed deliberately to be surrounded by water as a result of seasonal inundation. Glastonbury Tor was similarly surrounded by water when it was first in use during the Neolithic. Recent flooding in both places has given a vivid reminder of this watery past. 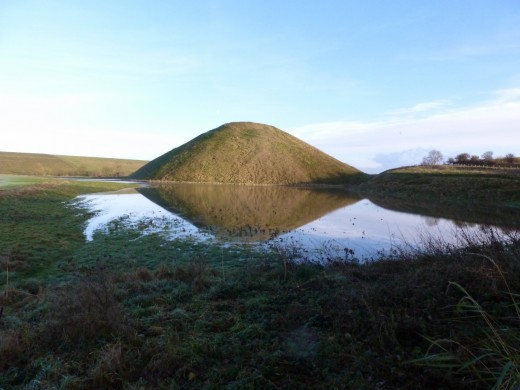 Both Tor and manmade hill could have represented a Primal Mound, of life emerging from watery chaos, or a symbolic pregnant figure of the Earth Mother herself. The seasonal moat around Silbury and Glastonbury’s inland sea could be seen as both cleansing and restoring vitality to the earth. As the annual floods of the Nile in Egypt or the Ganges in India indicate, fertilising of land by flood waters was more than just symbolic. Survival and the development of civilisations depended upon it.

The fact that both Glastonbury and Silbury are associated with nearby sacred springs which might be perceived as adding a potency and energy to the waters is also an interesting parallel. These springs are themselves connected to each other through their alignment with the Michael/Mary energies.

In his book “On Silbury Hill” Adam Thorpe imagines the world view that motivated our ancestors to devote those millions of man hours (and doubtless woman and child hours) to building the great monuments of Avebury and suggests the humility and awe with which we may usefully approach these places, recognising the vast imagination that inspired them.

In the Christian era the inspiration and dedication required to complete Glastonbury Abbey’s own monumental structure and the craftsmanship employed, shows some similar underlying motive forces to those which had led to the construction of stone circles, henges and burial mounds in an earlier age.

Along the pilgrimage it is fascinating to see how the influence of Glastonbury Abbey stretched across the land towards Avebury itself. Dotted along our route at Pilton, Doulting and Mells are the huge medieval tithe barns in which the Abbey’s agricultural bounty was stored, whilst many church guides along the way make mention of their historic tie to Glastonbury Abbey, through the estates that were bequeathed to it, such as at Stoke St Michael or Winterbourne Monkton where land was given to the Abbey in 928AD. It lies less than 2 miles from Avebury.

Quite how Avebury was understood and interpreted by these early monastics is hard to gauge, yet for many years it seems some accommodation between Christianity and the ancient beliefs was reached, with the sites at Avebury remaining largely undisturbed. Indeed not until 1320, did a new zealousness initiated by the Benedictine priory lead to significant destruction of Avebury’s ancient wonders. Just over 200 years later, Glastonbury Abbey was in its turn reduced to ruin, toppled as a new religious and political order imposed its dominance. Today we are witness to similar forces in a strife filled world where religious intolerance brings with it an urge to destroy all that has gone before.

Part of the process and value of pilgrimage is that it can inspire within us an appreciative and wondering humility for our ancestors and their endeavours and legacy. This seems a relevant quality for 21st century pilgrims to cultivate.

One lovely final irony can be found in the church in Avebury, situated a matter of yards from the great henge and stone circle. It seems apt that the church is dedicated to St James, patron saint of pilgrims. Within is an early Saxon tub font from the 8th or 9th century on which are carved two winged dragons, either side of a Christ figure. I like to interpret this (naively perhaps) as a symbolic representation of two alternative narratives in the complex and evolving story of human belief standing side by side, in some way reconciled.

The walker’s guidebook which includes route directions and background for the pilgrimage between Glastonbury and Avebury is available now via the website. https://marymichaelpilgrimsway.org/route/the-guidebook/

(This article first appeared in our newsletter, June 2015 – to receive this for free just get in touch. The newsletter is sent as an e mail attachment)