Connecting to the Earth

It was February 1987 that Hamish Miller and Paul Broadhurst decided to trace the Michael and Mary Lines described by their friend John Michell. John had become aware of this concept via such pioneers as Alfred Watkins in 1920’s and the mystic writer Ithell Colquhoun in the 1950’s who referred to a line of magnetic energy extending from the east coast of England to the tip of Cornwall. She thought of it as ”The Michael Force”.

This inspired Hamish to try and dowse this 300-mile energy line which crosses the South of England at 27% N of E. They thought it was a straight line and would only take a month! It took however three years for they discovered not only was it a curving sinuous line, but after reaching almost the centre point they discovered another balancing river of energy – so it was back to the beginning again.

The finding of the second band of frequencies was a huge learning curve for Hamish for he began to understand the earth was communicating via its ‘nervous system’. The information was revealed to him in small fragments which enabled him to cope, for he said “If I had known at the start there were two weaving bands of energy, I would not have got out of Cornwall!!”

The realisation that the earth is alive and the ‘magnetic lines of force’ are equal to her nervous system through which she can respond to our thoughts puts an enormous responsibility on the human race to treat her with love and respect, for the earth has a profound effect on our behaviour and wellbeing.

I know Hamish would be so excited about this wonderful Mary Michael Pilgrims Way project – it was his greatest wish to get people out of their cars and walk the land to discover hidden places and regain their rapport with all nature. Just to be still and listen and in so doing realise we are all connected, we are all one. 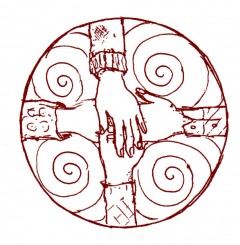