Today we take for granted the sound and light waves picked up by our radios and televisions, technology which 200 years ago would have been considered fanciful. Is it so far-fetched to think that there may be other subtle frequencies of energy, hard to measure empirically which the rational mind struggles to grasp, to which our intuitive mind responds? Perhaps our ancestors living in more direct relationship with nature were as a consequence more conscious of our latent ability to respond to these subtle energies, a facility akin to that possessed by birds and many other animals which seem to navigate their way using electromagnetic and biomagnetic energy forces.

The most beautiful thing we can experience is the mysterious. It is the source of all true art and all science. He to whom this emotion is a stranger, who can no longer pause to wonder and stand rapt in awe, is as good as dead: his eyes are closed.

In the west, the Gaia hypothesis of James Lovelock and the exploration of Deep Ecology  along with the influence of writers and campaigners such as Joanna Macey and Satish Kumar is leading to a profound re-evaluation of ancient beliefs and wisdom which survives amongst remnant communities of tribal people around the world. For example in the creation myths of the aboriginal cultures of Australia, or the ancient wisdom of Feng Shui in China which works to harmonise the energies of the earth to optimise wellbeing, we glimpse aspects of a widely held perception of the earth as a living being, animated in part by powerful streams of energy flowing through it. This energy is often represented symbolically by dragons or serpents. Similar beliefs may have underpinned the earth based, polytheistic spirituality which preceded Christianity in Europe, kept alive in our culture today in folk tales of dragons guarding hoards of buried treasue or slumbering in hillsides waiting to be woken. 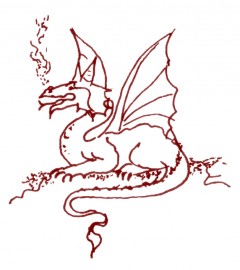 If we consider these streams of energy in the earth as akin to the meridians of the human body associated with acupuncture, it becomes easier to conceptualise the idea of node points, points of power on those meridians where the energy is concentrated and which seem to have influenced the siting of sacred structures for thousands of years.

…the serpent represents the mercurial currents of the earth spirit gliding in serpentine channels through the earth’s crust- the yin force of nature… when the serpent current of the earth is transfixed by the lance of the dragon killer, it can no longer move freely about the earth for its energies are now fixed and concentrated on one spot…All ancient tombs and stones were placed so as to coincide with and accumulate the flow of the earth’s vital energy. 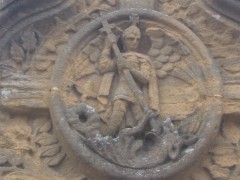 The process of walking between these sites seems as potentially significant as visits to the sites themselves. I liked the image described in a the transcript of a talk on the Confraternity of St James website which described significant points on the pilgrimage as being like pearls with the path between, the necklace on which they hung. Both components are necessary and the whole is more than the sum of its parts.