Pictures from ancient Egypt and China tend to support the belief that dowsing has been used throughout the world, probably for millenia.It has been used for finding water, metals and other objects, using forked sticks, L rods and pendulums. Other uses include detecting different forms of energy, healing and seeking answers to questions or trying to ascertain the future. Suspicion of dowsing by the church increased in the 16th century in Europe and it became discredited as the work of the devil and was made illegal in England under the Witchcraft Act of 1562.

Dowsing is an intuitional science, a combination of mental, emotional and intuitive faculties. In essence, a pendulum or other dowsing tool can be used as a ‘binary system’ to seek answers to questions once a reliable ‘Yes’ and ‘No’ can be obtained. Practice is needed to get in the right frame of mind to dowse effectively. A childlike curiosity often seems to produce the best results, where one’s mind is not producing the answer it thinks should occur, and thus pre-empting it. Once you have a consistent Yes and No, any question which can be answered Yes or No can be tried: sometimes the only limit is our imagination…

Dowsing rods are usually L shaped and made out of metal. Rudimentary rods can be made by dismantling and re-fashioning metal coat-hangers.The rods are held parallel to each other in the ‘search’ position whilst holding in mind what you are looking for. When you find it, the rods usually cross…

An issue which might arise is to ask why dowsers sometimes get differing results. This is a mystery, but could be attributable to differing sensitivities or mental distractions.When several dowsers independently of each other get similar results, it is highly affirming.As Hamish Miller used to say, the first 3 rules of dowsing are Practice, Practice and Practice…

Dowsing is an art that takes ‘a minute to learn, a lifetime to master…’ 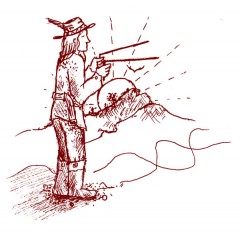 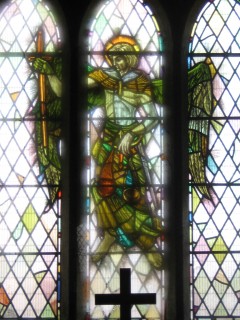 In “The Sun and the Serpent” Hamish Miller and Paul Broadhurst set out to dowse for the earth energy line associated with the ’ St Michael Line’ re-discovered by John Michell in the 1960’s. John Michell noticed the alignment of churches dedicated to St Michael stretching from Glastonbury to Burrowbridge Mump, and took the line back to Michaels Mount in Cornwall to the west and Bury St Edmunds and the Norfolk coast in the east. He felt this may have been an ancient pilgrimage route.

During Miller and Broadhurst’s exploration in the 1980s they discovered eventually that what they were tracking consisted of two energy lines that curved sinuously around a straight course across the country, like a kind of Caduceus. 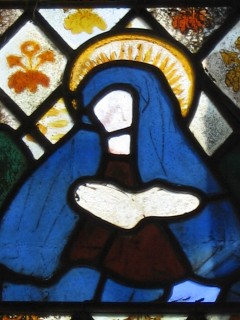 The lines seemed to each have a different quality. ‘Michael’ went through a lot of high rugged places with churches dedicated to St Michael, whereas the line they named ‘Mary’ seemed to have an affinity for watery, peaceful spots, and churches on the line were often dedicated to the Virgin Mary (who could be seen as a Christianised version of the earth goddess of old).

The British Society of Dowsers have a special interest group called the Earth Energy Group.